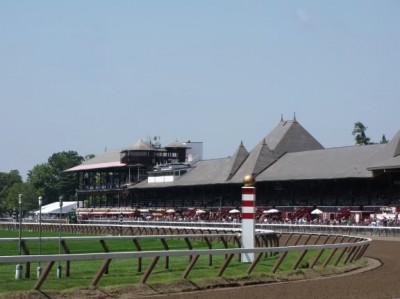 There is an older gentleman in my neighborhood who leaves his house at exactly 11am each day during late July and August.  These happen to be the 40 days that Saratoga Race Course is running.  At first I wondered if it was coincidence, but I have seen him at the track every time I have attended.  Always in the same spot, with the same guys and the same beverage.  He must really enjoy that routine.

This prompted a question – is he a horse racing fan who is making the most of his retirement or a professional gambler who is actually leaving for the office each day at 11?  I don’t know the answer and I don’t know him well enough to ask, but I assume the latter since it is more exciting.  Either way he appears to be paying his bills and having a blast – so kudos to him.

Although this thought process prompted an additional question – what do my neighbors think I do?  Some we know personally, but many are only acquaintances.  How many of them realize that I manage sales and marketing for StartUpSelling from my virtual home office?  How many think I am unemployed and playing computer games all day?  How many think I am retired or a professional gambler?  Maybe I should take an informal poll at the next block party.

The results of the poll would be interesting but not relevant.  The point of these observations and questions, as the author Thomas L. Friedman might say, is this: The democratization of technology, information and finance has created the opportunity for many Americans to build a successful career from their virtual offices – including two on my street – whether they choose to work from a spare bedroom, or next to the margarita bar at the track.