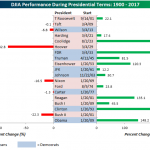 Which US president posted the largest Dow gains in history? According to MarketWatch and Bespoke, it was Calvin Coolidge. His 252% gain outpaced all other US presidents. There were however, other presidents who enjoyed triple-digit percentage Dow gains during their terms including: Democrats Bill Clinton (227%), Franklin Roosevelt (197%) and Barack Obama (148%), along with Republicans Ronald Reagan (135%) and Dwight Eisenhower (120%). Who were the worst performing presidents? Hoover, a Republican, saw the largest Dow drop (-83%), with the second and third biggest falls occurring under Republicans George H.W. Bush (-22%) and Richard Nixon (-16.5%). What will Trumponomics yield over the next four years? Your guess is as good as mine, though after eight years of market gains, a correction would seem to be more likely than not.

What’s the only sure thing? Try a complimentary insurance agency marketing and lead generation review with the experts at StartUpSelling. Click here to learn more.