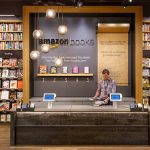 up with this, Amazon the king of Etail is opening retail bookstores? This sounds like an April fools story rather than a new strategic initiative. But as it happens, the latter is true as Amazon opened the first of three New York City retail book stores in May.

It was reported that the first Amazon store occupies 4,000 square feet, carries 3,000 book titles, and is located at Columbus Circle. It also carries Amazon tech products like the Echo and Kindle, and faces all books outward for easy viewing of the covers. Signs underneath the books note the Amazon online star rating (only 4 stars and up are selected for the store) and the total number of reviews for each book. Amazon Prime members pay a preferred rate, while non-members pay a higher rate.

To add a further touch of irony to the story, the store is located in a mall that once included a Borders bookstore. Will this be a trend for the giant Etailer, identifying retail opportunities once the retail competition has been decimated by their more efficient Etail model?

Amazon likely envisions a new type of retail opportunity, because the traditional retail book business has hardly been robust. According to The Street, Barnes and Noble continued to see declines in their 2017 comparable store sales, expecting a drop of approximately 7% for the year. Then again, Amazon’s new books store is not the same animal as Barnes and Noble, taking a page from the Apple Store concept with their own Amazonian twist. With malls trying to reinvent themselves, as more and more retailers shut their doors, a national chain of Amazon retail book stores would be a warmly welcomed surprise.