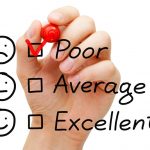 Last night around 8pm, I called Netflix because an error message was displaying on my TV. I got a recording, which said my wait time would be less than two minutes. I’d estimate a customer service agent answered within a minute, completely fluent in English (likely US based), and not from an offshore call center. They solved my issue quickly and cheerfully. It was the second time I called Netflix over the past year. The prior instance provided the same result, fast, friendly, even cheerful service. I spend about $100 bucks a year for Netflix, so at that price, one would think almost any company could offer great service like this.

Two days ago, I was buying TVG train tickets to go from Paris to Avignon. I went online to the SNCF website (French National Railway Corporation website). I was having an issue processing my credit card, so I called them. They answered immediately, the customer service agent spoke English (quite well), and was very polite and helpful. However, he informed me that since I was from the US, I had to pay through their partner, Rail Europe.

When I went to the Rail Europe site, I found the ticket prices were significantly higher, so I called their support line. The estimated wait time was, 45 minutes! They did offer a call back service, but I would still have to wait 45 minutes. The tickets would run about $600. After reviewing online comments, complaining that Rail Europe charges extra fees, and there is nothing that can be done about that (sounds like Ticketmaster doesn’t it), I purchased the tickets.

Then we come to United Airlines customer service specifically, and the airlines in general. Another day, and another video surfaces. This one was about a United customer getting charged $300 to check a bag, and then having their reservation cancelled because they were video recording the discussion. The customer service agent seemed really cranky, the baggage fee seemed excessively high, and United seems to have a massive customer service issue. But for that matter, so does American, Spirit and many other airlines. Last winter, we pulled a delay due to an engine issue on an American flight, and missed our connecting flight. The next flight we could take was 6 hours later. American did nothing for us, and the customer service agent we conversed with seemed to care little about our delay or predicament. That said, I recently flew Alaska Air and Jet Blue, and thought their customer service was fairly good. I try to fly these two airlines whenever possible, as I’ve have mainly good experiences with them.

It seems that customer service has little to do with the price tag, and much to do with the company culture. There are plenty of companies that provide great customer service, and too many that don’t. It starts from the top down, and as consumers, we should do everything possible to reward those companies with great service, and avoid those who with a poor service record. Unfortunately, with companies like Rail Europe, and the airlines, sometimes there is no choice but to voice our frustration.