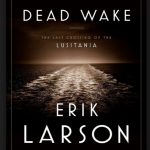 Every year I look back at the books I read and select my ten favorites. This past year certainly a tumultuous one, a year of bitter campaigning, failed pollster predictions, and the surprise election of a real estate magnate who refused to release his taxes and had six bankruptcies on his resume. This may have influenced my reading selection which tended to be fictionally centric, perhaps in part because of the constant reality of political bickering during the election. Also notable was that none of my ten favorite books of the year were about politics! This year I read some great fiction and non-fiction, science fiction, business, and poetry books. For what it’s worth, here were my favorites in alphabetical order:

In the early months of WWI, an opulent ocean liner sailed from New York toward Liverpool. The Lusitania was one of the fastest liners in service, and thought to be able to outrun attackers, if any dared to threaten a civilian ship. Enter U-boat Unterseeboot-20, on a mission to sink large tonnage ships, and the mystery of why British intelligence tracked this U-boat, but failed to warn the Lusitania. Though we all know this sad tale, Larson once again provides a compelling, historically accurate story that makes the reader feel like they were there. Another great work by Erik Larson.

In this day and age, where a single smart phone provides greater computing power than a building full of computers in 1940, it’s hard to fathom how thousands of IBM keypunch machines and tabulators effectively ran the Nazi war effort. But Edwin Black details the intricate and concerning business dealings of International Business Machines (IBM) and its European subsidiaries, as they helped the Hitler government during the 1930’s and early 1940’s. Black’s meticulous research examines, in disturbing detail, how IBM’s Hollerith based technology helped facilitate everything from Nazi genocide to the efficient running of the German train system. Black illuminates how every Nazi concentration camp maintained its own Hollerith Department, responsible for keeping tabs on inmates using IBM punch card technology. It brings a new and nefarious connotation to the “Hollerith punch card” and how IBM and Watson capitalized on profits by empowering Germany’s national data programs.

This is a wonderful collection of poems and prose by an author who has faced and overcome adversity. Many of the poems have an athletic theme, including my favorite, In Centerfield. To read these poems is to understand the author, his life, his challenges and his pervasive optimism. Biondolillo was orphaned by the age of 10, went on to become an elite free style wrestler, and ultimately a successful entrepreneur and businessman. I found the poems compelling and inspirational.

Foer is on a mission to improve his memory, and decides to seek out the top mental athletes of our time, those competing in the world memory master championships. Along the way he explains the history of memory training, and how it’s changed over the millennia. Readers learn about the link method, the story method, the peg system, the Loci method and the memory palace. Ultimately Foer trains for, and enters the USA Memory Championship, with surprising results.

In this interesting, illuminating and entertaining book, Gladwell asks what attributes, conditions and circumstances make people the most successful. In what way are these over achievers different from others? His answers are intricate and fascinating, stating that timing, culture, family, their generational imprint and their up upbringing are all part of a complex formula that separates the greats from the rest. From Bill Gates attending the right high school at the right time with the right computer technology, to why hockey players need to be born early in the year to become stars, to why the Beatles became one of the greatest rock bands, Gladwell advances his surprising findings.

This is a YA novel is similar in genre to Hunger Games and Divergent. It is an apocalyptic scenario, where aliens invade earth in five well defined waves. The first wave results in an EMP (electromagnetic pulse) which destroys all electronics. In the second wave, an object causes massive coastal flooding, wreaking havoc and destruction on all coastlines. The third wave unleashes a virus which wipes out most of the remaining population. And so on. The book follows our heroine Cassie, as she forages to survive, and meets some interesting people and challenges along the way.

I’d describe this as a “Star Trek meets Star Wars” series of 15 books. Each book is an episode, similar perhaps to one hour television show (or perhaps a two hour Star Wars type movie). The year is 3472 and the Earth is recovering from a millennia of despair caused by a plague that nearly destroyed the entire population. However the discovery of a “data ark” allows the Earth to advance rapidly. Enter a brutal enemy invasion, a James T. Kirk type captain, and a loyal starship crew, and Ryk Brown has a formula for an entertaining book series, and perhaps a new TV show. Readers who like Star Trek and Star Wars, will probably like this series.

This work was written in an interesting style, from the first person perspective of three women, Rachel, Anna, and Megan. Rachel is a 32-year-old alcoholic, Anna is a young stay-at-home mom, and Megan is a beautiful woman with a troubled past. It was a little confusing in the beginning, as the author slowly weaved the progressively intertwining tales of these women. The Girl on the Train is full of twists and turns, mystery and suspense, love and murder. It keeps the reader guessing until the very end. What did not come as a surprise, was that it could be repurposed into a movie.

If you liked River of Doubt, you’ll undoubtedly like this book. This is a story about an explorer, Percy Fawcett, who disappeared in 1925. He vanished with his son while exploring the Amazon in search of an ancient lost city. For decades thereafter, dozens of explorers and scientists tried to find evidence of his journey, without success. Enter David Grann, a New York journalist who knows little if anything about camping or exploring, who is compelled to make his own journey into the Amazon, to find new evidence about Percy Fawcett and the Lost City of Z.

PK Dick was ahead of his time, and a prolific writer. Many of his works have become movies (Total Recall, Blade Runner, etc.), and most recently Amazon has created a TV series, Man in the High Castle, based on one of his stories. The Second Variety is a post-apocalyptic tale, where the world has been destroyed by a US/Russian nuclear war. The last remaining humans are hunkered down, fighting from bunkers. But perhaps there is hope, as the Americans have invented robots capable of roaming and killing the Russians. Then again, it looks like the Russians may have invented robots of their own. Or is it the robots who have invented new robots, a foretelling of the famous Terminator stories to come?